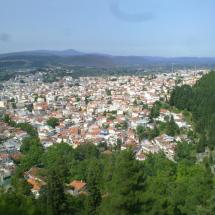 The Prefecture of Viotia belongs in Central Greece and is situated between the prefectures of Fokida, Fthiotida and Attica. It is a flat and very fertile area. The mountainous areas of the prefecture are limited to the slopes of Elikonas, Kitheronas and Parnassos. The plains of Thiva, Chaeronea and Copais are watered by Asopos, Kifissos and Livadostra rivers and they produce significant quantities of agricultural products which are sent to Athens, the biggest consumer center of the country. Another factor that contributes to the economic development of the area is stockbreeding (mainly cattle). However the pillar of the local economy is the manufacturing sector which accounts for most of the GDP of this prefecture, which ranks third nationwide in manufacturing production.

The administrative and commercial center of the prefecture is Livadia while Thiva is also a major urban center. The most popular destinations for the Athenians are the picturesque villages of Distomo and Arachova at the foot of Mount Parnassos due to their short distance from the capital and the highly developed tourist infrastructure. In Viotia you will find several attractions such as archaeological sites and Byzantine churches (the Monastery of Saint Louka definitely stands out), as well as beautiful beaches and coastal settlements. Within a short distance from Athens and a good road network, Viotia is the perfect destination!